Evan Graham has lived in and around Newcastle all his life. He attended the Newcastle Steiner School, in which his family were involved, from his early years through to year 12 which he completed in 1996.

During 1995 Evan completed a Building Construction theory course by correspondence, as well as doing some work experience at Cardiff Joinery. In 1997 he completed a full year pre-apprenticeship program in Carpentry & Joinery at TAFE, excelling in all areas. Late in the same year he obtained full time employment with Lake Macquarie Developments where he stayed until mid 2001, completing his Carpentry apprenticeship and working on all manner of domestic projects, including some large developments.

During this time Evan won two separate apprenticeship awards; firstly in 1998 he was awarded “Outstanding Apprentice” (All Trades, Belmont Campus) by the Master Builders Association. Then in 1999 he was awarded “Apprentice of the Year (Carpentry & Joinery)” by HRATA– Hunter Regional Apprenticeship & Traineeship Awards. 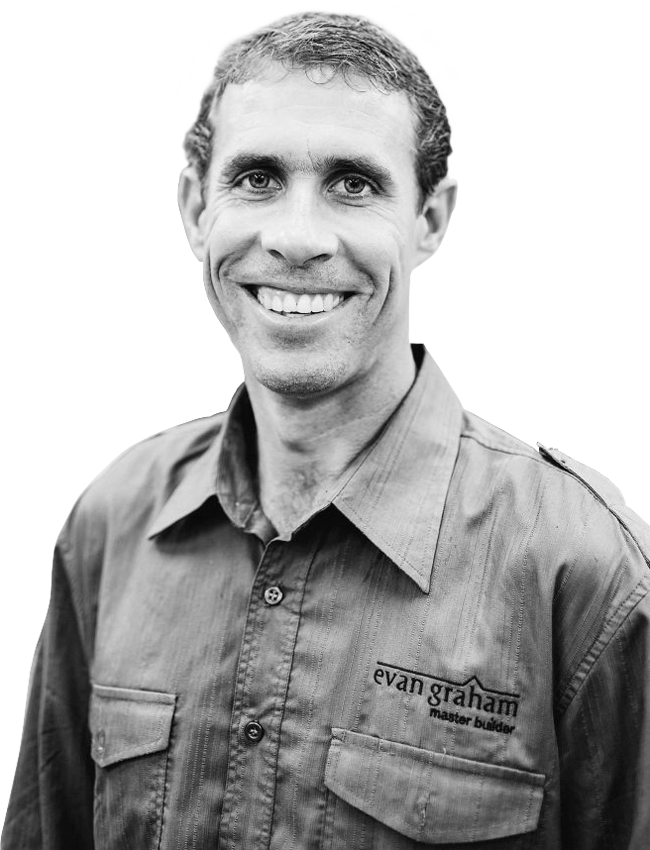 The complete focus on the client’s vision, needs and satisfaction, and a pedantic attitude to quality from the base work to the finishing touches are an integral part of day to day operations.

He also studied his certificate IV in Contractors Management after hours during 1998/1999 and achieved either “Commended” or “Highly Commended” in all modules. Having completed all his training both theoretical & practical and having achieved a high level of trade competencies, Evan began his own business in the middle of 2001. Since then he has completed all manner of building projects from decks and bathrooms, small and major extensions and renovations, new houses as well as some commercial work.

In 2011 Evan’s business incorporated and became Evan Graham Master Builder Pty Ltd (EGMB). EGMB now prides itself as being one of the most thorough and competent builders in Newcastle and are very proud of their ever increasing reputation and success, evidenced by our numerous awards and testimonials. EGMB have been specialising in high quality Architect designed building work for many years. However our primary focus is now on creating Sustainable, Healthy and Energy efficient buildings. We aim to incorporate exemplary design and detail with high performance building systems, accessories and eco-friendly products.

We have developed strong working relationships with a number of local design consultants who have similar focus and we look forward to partnering with them and to providing ongoing value and satisfaction to our clients into the future. Evan’s long term core values are uncompromisingly represented by EGMB. The complete focus on the client’s vision, needs and satisfaction, and a pedantic attitude to quality from the base work to the finishing touches are an integral part of day to day operations.

Nothing is left undone, nothing ignored. The EGMB team aim to not only meet, but to exceed their client’s expectations. EGMB is not one of those builders that will leave a project in the hands of their subcontractors; a project supervisor will always be there to set-out, oversee, and monitor progress and safety. Evan is regularly on site to coordinate and supervise the work himself, and often on the tools at critical stages. Of course, EGMB also incorporates a highly skilled core construction team who are proficient in balancing their supervisory and production responsibilities.

EGMB are very grateful to have such an awesome team. In 2015 Evan obtained his Diploma of Building & Construction (Building) CPC50210 through the MBA NSW and is thereby qualified & prepared should NSW introduce licensing for the Commercial sector, which at present is not mandatory. Thank you for reading about us. We are here to serve those that value our uncompromising and careful approach. Yes, we care about you, your project and your future. We don’t compete on price alone. There are many other things that set us apart and make our client’s happy!

signup to our newsletter

Subscribe to our newsletter to receive the latest information in sustainable passive house design and construction, evan graham project updates and more.

contact us to discuss your new home today. let’s talk!